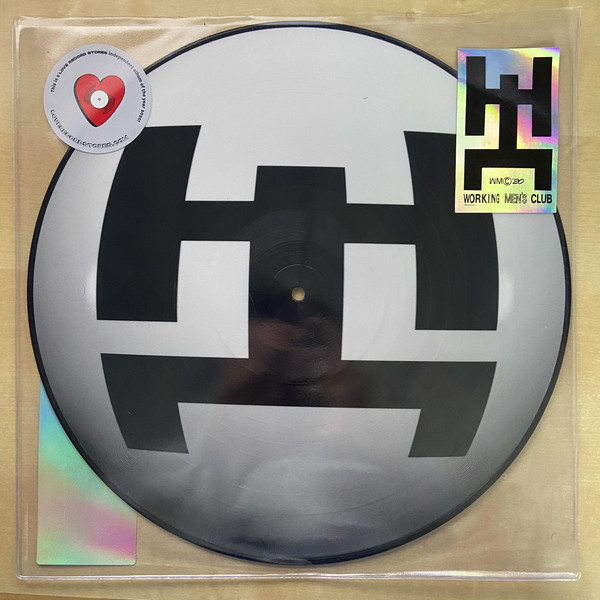 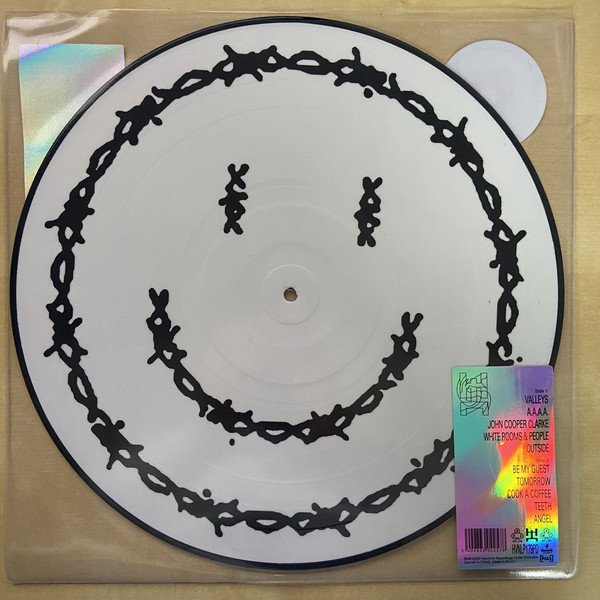 A rumble on the horizon. Gritted teeth, nuclear fizz and fissured rock. A dab of pill dust from a linty pocket before it hits: the atom split, pool table overturned, pint glass smashed — valley fever breaking with the clouds as the inertia of small town life is well and truly disrupted. Here to bust out of Doledrum, clad in a t-shirt that screams SOCIALISM and armed with drum machine, synth, pedal and icy stare are Working Men’s Club, and their self-titled debut album.

It’s hard to believe that the three fresh-faced music college kids who bounced out of nowhere and onto the 6 Music playlist with the sweet-but-potent, twangy guitar-led ‘Bad Blood’ (Melodic Records) in 2019 are the same band who clattered back there with maddening techno-cowbellpuncher ‘Teeth’ less than half a year later — and that’s because for the most part, they’re not. Having signed to Heavenly and with the hype around them building, underlying tensions came to a boil a mere five days before the band’s all-important first London headline show, and wunderkind frontman Syd Minsky-Sargeant was left high and dry; guitarist Giulia Bonometti had decided to focus on her blossoming solo career, and drummer Jake Bogacki was against the new electronic direction Minsky-Sargeant saw Working Men’s Club taking. (“I guess WMC started off as a bit more guitar-based, tryna copy stuff in our own way, like the Velvets and stuff like that, but I didn’t want it to be that anymore. It became dancier and dancier as I tried to experiment”, he explains.) All that remained of the outfit was Minsky-Sargeant himself, recently recruited bassist Liam Ogburn, and — given the band’s indebtment to wood panelled, community-run venues for an early leg-up — a rather pertinent name. But with staunch determination burning in his belly, Minsky-Sargeant quickly assembled a lineup consisting of himself, Ogburn, and Mairead O'Connor (The Moonlandingz) and Rob Graham (Drenge, Baba Naga) — both of whom he had met at the Sheffield studio of producer Ross Orton (The Fall, M.I.A., Arctic Monkeys) — replaced the live drums with a drum machine, and rush-rehearsed the new setup before going ahead with the show. “If it wasn’t for Sheffield then we probably wouldn’t have played that gig” he says. “I was shitting myself, because I didn’t know what would work or not.” Luckily, something stuck: “After about three gigs with that lineup it was already way better than what we’d had before.” Two original members lighter and three new ones the richer, Working Men’s Club took on a new hard-edge permutation, their shows becoming ever more sweaty, pulsating and rammed to the rafters; their energy raw; their vigour renewed; their interplay as musicians growing ever-more intuitive and elastic. Their eponymous collection of songs is equal parts Calder Valley restlessness and raw Sheffield steel; guitars locking horns with floor-filling beats, synths masquerading as drums and Minsky-Sargeant’s scratchy, electrifying bedroom demos brought to their full potential by Orton’s blade-sharp yet sensitive production.

It was at home in the town of Todmorden in the Calder Valley, West Yorkshire, feeling hemmed in, that 18-year-old Syd Minsky-Sargeant first began assembling these 10 songs. “There’s not much going on, not much stuff to do as a teenager” he says. “It’s quite isolated. And it can get quite depressing being in a town where in the winter it gets light at nine in the morning and dark at four”. It is this sense of cabin fever, of “thinking that you will never escape a small town in the middle of nowhere” on which the album opens, with the boredom-lamenting and rave-reminiscent ‘Valleys’. In a post-punk talk-sing over an old-skool beat, Minsky-Sargeant begins:

Trapped, inside a town, inside my mind

Stuck with no ideas, I’m running out of time

There’s no quick escape, so many mistakes, I’ll play the long

Working Men's Club began their career playing angular, cheerfully melodic '80s-style post-punk, then after one single, most of the band quit. Galvanized by leader Sydney Minsky-Sargeant's love of dance music and techno, they re-formed as a synth-heavy, propulsive, and -- as their abrasively entertaining 2020 self-titled album showed -- still quite punky dance-rock band. Hailing from Todmorden in West Yorkshire, England, the band were formed in mid-2018 by vocalist/guitarist Sydney Minsky-Sargeant, guitarist Giulia Bonometti, and drummer Jake Bogacki when the trio were still in their late teens. They built a following thanks to their electric live shows and Minsky-Sargeant's skills as a cheekily opinionated frontperson. After releasing a single heavily influenced by guitar-based post-punk, 2019's "Bad Blood," Working Men's Club signed to Heavenly Records. Around this time, Minsky-Sargeant's desire to switch away from making guitar music in favor of a more electronic sound alienated the rest of the band. The conflict came to a head less than a week before a concert in London; Bonometti left the band to devote time to her Juila Bardo project and Bogacki just left. Recently added bassist Liam Ogburn stayed on, and the duo were joined for the concert by multi-instrumentalists Mairead O'Connor of Moonlandingz and Rob Graham of Drenge, both of whom Minsky-Sargeant had met at the Sheffield studio of producer Ross Orton. This lineup stayed together, and with Orton in the producer's chair, recorded Working Men's Club's first album, capturing a sound that was equal parts insistent dance music and confrontational punk. The first single released from the sessions, "Teeth," appeared in August 2019 and served notice that the group's sound had undergone a major overhaul. Their self-titled debut long-player was due to be released in June 2020, but the band delayed it and instead released "Megamix," a 21-minute continuous remix of the album done remotely by Minsky-Sargeant and Orton. The album proper was finally issued in October of 2020. There is another band with the same name: 2) Noisy bastards from bloody London, playing hardcore punk. https://workingmensclubhc.bandcamp.com/ Read more on Last.fm. User-contributed text is available under the Creative Commons By-SA License; additional terms may apply.
FREE SHIPPING ON ORDERS OVER £100 TO UK MAINLAND ONLY
See exclusions
View Cart