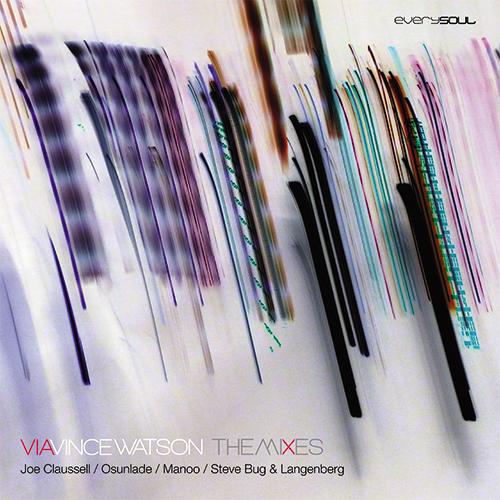 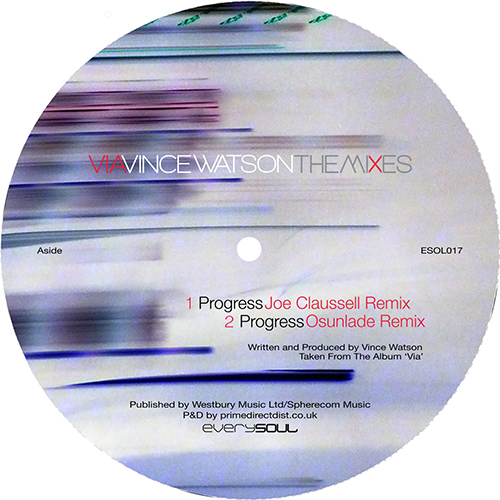 WATSON, VINCE - VIA - THE MIXES

Recent releases on Cocoon, Poker Flat, Yoruba, Mobilee and his own Everysoul label. Watson has had a host of classy artists remixing him, Carl Craig, Joe Claussell, Josh Wink and Osunlade. In 2018 Vince began probably his most important project in his career with Derrick May as ‘Rhythim is Rhythim’ on Transmat, reconstructing two of Derrick’s tracks ‘Icon’ and ‘Kao-tic Harmony’. Vince’s own Planet E classic ‘Another Rendevous’ was revived and released on Yoruba in 2018, and in the same year he released his 9th studio album ‘Via’.

Now ‘Via’ gets some remix action from Deep House heroes Joe Claussell, Osunlade, Steve Bug & Langenberg and Manoo. First is a rare remix by Joe Claussell, not so much of a remix, but a live jam with his most trusted musicians, overdubbing loops from the original. It’s eleven minutes of pure live musicianship from the soul. Sumptuous piano solos, percussive grooves, insatiable synths and lush chanting vocals help re-define what a ‘remix’ really is.

On the flip is the master of deep groove Osunlade with a Yoruba Soul workout, delivering a stripped back version in contrast to Clausell, adding his trademark sound but keeping the integrity of the original. The third remix is by Poker Flat boss Steve Bug and his long-time collaborator Langenberg with a seriously funky version of the title track ‘Via’. Using deep chords and stabs from the OG, building with extra strings and typically funky drums bringing the head nod factor up a few notches.

Completing the line-up is French House heavyweight Manoo, with a super smooth version of 'Progress'. His deep trademark groove and hypnotic style are evident throughout. The subtle strings build and long bass lines bring the EP to the most perfectly fitting conclusion.

With almost 25 years in the Electronic music industry, Vince Watson has released over 250 projects worldwide, including 11 albums and 75 remixes, and his hard work has been rewarded with recordings for some of the very best electronic music labels like Planet E, Yoruba, Poker Flat, Cocoon and Transmat as well as running his own Everysoul label. His skillsets have allowed him to work with some of the very best electronic musicians including Laurent Garnier, Derrick May, Richie Hawtin, Sven Vath, Carl Craig, Osunlade, Steve Bug & Josh Wink and as a touring musician has been able to play at some of the worlds best clubs and events including Enter at Space, Ibiza, Berghain Berlin, Womb Tokyo and many events in The Netherlands. As well as a touring artist, Vince’s experience and knowledge is also being put to use by Conservatorium van Amsterdam. Since 2018 Vince has lectured at AEMA, the CvA’s new Electronic music school, preparing eager and upcoming producer and DJ’s for the world ahead of them. Vince also lectures for School of House at the A’DAM tower in Amsterdam. 2019 see’s Vince release 2 big projects. ‘Teardrops’ comes on Joe Claussell’s Spiritual Life label out of New York. Followed by ‘DnA’, an 18 track Detroit techno album. Read more on Last.fm. User-contributed text is available under the Creative Commons By-SA License; additional terms may apply.
FREE SHIPPING ON ORDERS OVER £100 TO UK MAINLAND ONLY
See exclusions
View Cart