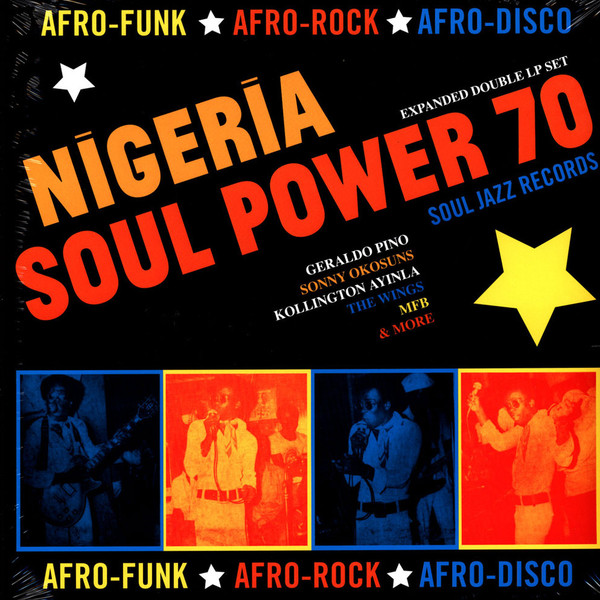 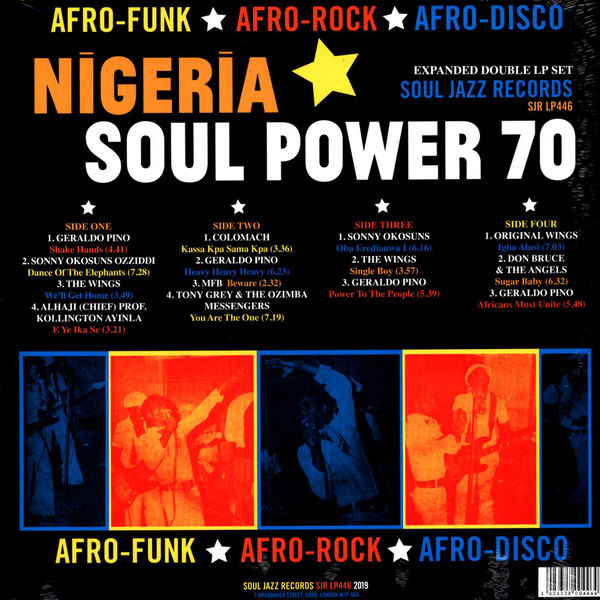 While for many people the fusion of funk and jazz music with Nigerian rhythms and aesthetics began with Fela Kuti and his afro-beat sound, in fact this can be traced further back to the phenomena of the 1960s Nigerian artists and house bands in nightclubs and hotels who interpreted US soul and pop music with a local flavour and none more so than Geraldo Pino, the ‘African James Brown’ who features heavily in this collection. Other similarly inspired Nigerian funk and soul artists featured here included Tony Grey and his Ozimba Messengers and Don Bruce and The Angels.

Nigeria Soul Power 70 includes a number of tracks from the group Wings originally known as BAF (Biafran Air Force) Wings, an army band formed during the Biafran civil war in Nigeria. The groups’ heavy mixture of funk, rock and African styles was popular among many Nigerian groups at the time.

Beneath the shadow of the few Nigerian artists who signed international recording deals in the 1970s - Fela Kuti, King Sunny Ade, Chief Ebenezer Obey - lies of vast wealth of largely undiscovered musical transmutation and cultural cross-pollination and included here are heavy afro-funk/rock and disco tracks from artists such as the legendary Sonny Okosuns as well as rare cuts from little-known outside of Nigeria - groups such as Colomach and MFB. Most of these obscure artists signed to major labels in Nigeria in the commercial slipstream that opened up as Philips, Decca and EMI tried to emulate the international success of the big three international Nigerian artists.

Finally featured here is Kollington Ayinla, one of the co-founders of Nigerian Fuji music, who gives us perhaps the heaviest of all tracks on this album. Ayinla is the great moderniser of the Fuji sound and in the late 1970s began adding Bata drums and synthesizers to his authentic music to create a powerful and heavy new fusion of traditional and modernist aesthetics, embracing both new technology and experimentation while rooted firmly in Nigerian historical lineage.