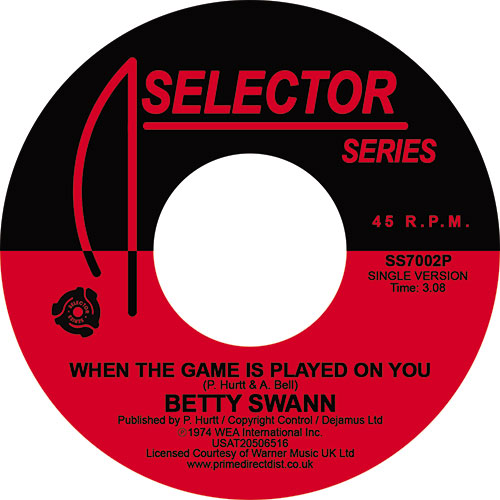 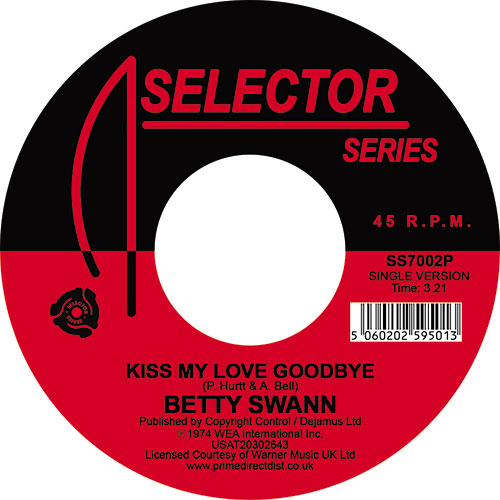 SWANN, BETTYE - WHEN THE GAME IS PLAYED ON YOU / KISS MY LOVE GOODBYE

- NEW RELEASE
Sorry, this item is currently unavailable.
ARTIST:
Swann, Bettye
TITLE:
When The Game Is Played On You / Kiss My Love Goodbye
LABEL:
Selector Series
CATNO:
SS7002P
STYLE:
Soul / Soul /
FORMAT:
Vinyl record
DESCRIPTION:
Classic Soul - Repressed on Ltd Edition 7" - Off the back of their stunning reissue of Minnie Riperton – Les Fleur / Oh By The Way, Selectors Series hit you with a 7 inch reissue of two straight from the heart, Philly Soul gems by none other than Bettye Swann.

Flip it over to find the smooth, soulful ‘Kiss My Love Goodbye’, a Spinners-esque track with stirring vocals that hit the heartstrings from the off.

Although late bloomers in the Northern / Modern soul scenes they became bona fide classics. Further interest was aroused when Tom Moulton remixed both songs in the ‘00s, igniting dancefloors wherever they were played. Not surprising though when you look at the credits on both tracks.

The Young Professionals were the new crack production team in Philadelphia at the time. Made up of the masterminds Phil Hurtt, LeBaron Taylor, Bunny Sigler and Tony Bell their incredible studio prowess shines bright in both these Bettye Swann recordings.

Bettye Swann (born Betty Jean Champion, October 24, 1944, Shreveport, Louisiana) is an American soul music singer, best known for her 1967 hit song "Make Me Yours". She grew up in Arcadia, Louisiana, one of 14 children, and moved to Los Angeles, California, in 1963. Although some sources state that she was in a vocal group known as The Fawns who recorded for Money Records in 1964, she has refuted this, saying that she sang with a trio in Arcadia by that name. In 1964 she started a solo singing career, as Bettye Swann, at the prompting of local DJ Al Scott, who became her manager. After a minor hit with the self-penned "Don’t Wait Too Long". her big breakthrough came with "Make Me Yours", which topped the Billboard R&B charts in July 1967, and also made #21 on the Billboard Hot 100. In 1968 she split with Scott, moved to Georgia, won a new contract with Capitol Records and had another hit in 1969 with "Don't Touch Me" (#14 R&B, #38 Hot 100). In 1972 she transferred to Atlantic Records and had a couple of minor hits with "Victim of a Foolish Heart" (later revived by Joss Stone), and Merle Haggard’s "Today I Started Loving You Again". She continued to record until the mid-1970s, but with little commercial success. Her last public performance as Bettye Swann was in 2013, live in Cleethorpes. As Betty Barton, she then worked in the education sector in the Las Vegas, Nevada area, and became a Jehovah's Witness. She is now retired and, according to a 2005 interview, suffers from a degenerative spinal condition. After leaving Money Records she lived for a short time in Athens, Georgia. Read more on Last.fm. User-contributed text is available under the Creative Commons By-SA License; additional terms may apply.
FREE SHIPPING ON ORDERS OVER £100 TO UK MAINLAND ONLY
See exclusions
View Cart