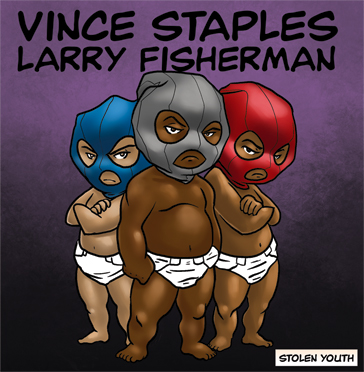 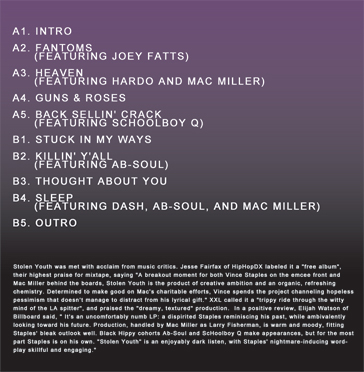 Vincent Jamal Staples (born July 2, 1993) is an American rapper and actor from the Ramona Park area of North Long Beach, California.[2] He is a member of the hip hop trio Cutthroat Boyz alongside fellow Californian rappers Aston Matthews and Joey Fatts. Staples was once a close associate of Odd Future, in particular Mike G and Earl Sweatshirt. He is currently signed to Blacksmith Records, ARTium Recordings and Def Jam Recordings. Staples rose to prominence with appearances on albums by Odd Future members and his collaborative mixtape titled Stolen Youth with Mac Miller, who produced the project. In October 2014, he released his debut EP Hell Can Wait, which included the singles "Hands Up" and "Blue Suede". His debut album, Summertime '06, was released on June 30, 2015, to critical acclaim. He was also featured as a part of the XXL 2015 Freshman Class.[3] His second album Big Fish Theory incorporates avant-garde, dance and electronic influences. It was released on June 23, 2017, to further acclaim from critics. He was also featured on Gorillaz's album Humanz. On November 2, 2018, Staples released his third studio album, FM!. Read more on Last.fm. User-contributed text is available under the Creative Commons By-SA License; additional terms may apply.

Larry Fisherman is Mac Miller's production alter-ego. He has three projects, two solo and one collaboration with Vince Staples ("Stolen Youth"). "Run-On Sentences Vol. 1" released in 2013 and Vol. 2 released in 2015. Larry passed away in 2018. Read more on Last.fm. User-contributed text is available under the Creative Commons By-SA License; additional terms may apply.

OTHER RELEASES ON AAA RECORDINGS OR BY STAPLES, VINCE / FISHERMAN, LARRY:

We have many other items in stock by Staples, Vince / Fisherman, Larry and on the label AAA Recordings.