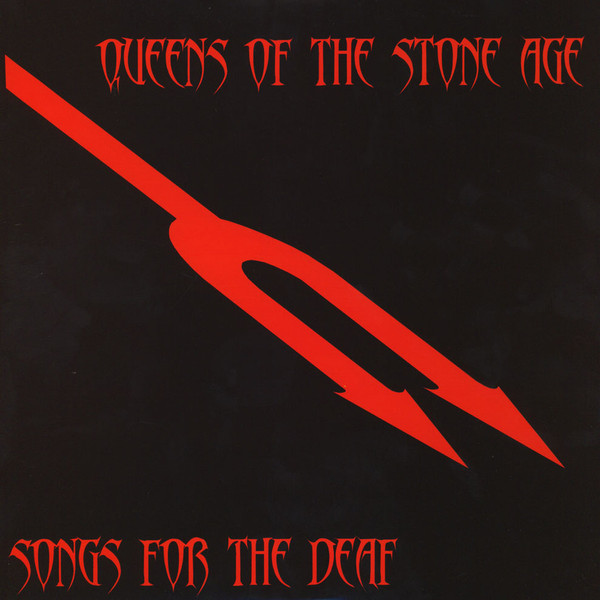 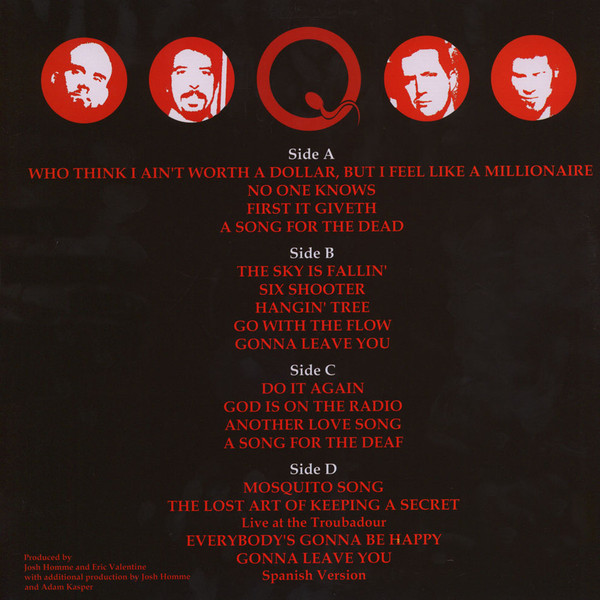 QUEENS OF THE STONE AGE - SONGS FOR THE DEAF

On their third album, Songs for the Deaf, Queens of the Stone Age are so concerned with pleasing themselves with what they play that they don't give a damn for the audience. This extends to the production, with the entire album framed as a broadcast from a left-of-the-dial AM radio station, the sonics compressed so every instrument is flattened. It’s a joke run wild, punctuated by an ironic mock DJ, and it fits an album where the players run wild. As usual, Josh Homme and Nick Oliveri have brought in a number of guests, including Mark Lanegan on vocals and Dean Ween on guitar, but they’ve anchored themselves with the drumming of the mighty Dave Grohl, who helps give the band the muscle sorely missing from most guitar rock these days, whether it's indie rock or insipid alt-metal. QOTSA may be a muso band -- a band for musicians and those who have listened to too much music; why else did the greatest drummer and greatest guitarist in '90s alt-rock (G

PLAY
CUE
MP3
a1
You Think I Ain't Worth A Dollar, But I Feel Like A Millionaire
a2
No One Knows
a3
First It Giveth
a4
A Song For The Dead
b1
The Sky Is Fallin'
b2
Six Shooter
b3
Hangin' Tree
b4
Go With The Flow
b5
Gonna Leave You
c1
Do It Again
c2
God Is In The Radio
c3
Another Love Song
c4
A Song For The Deaf
d1
Mosquito Song
d2
The Lost Art Of Keeping A Secret - Live At The Troubadour
d3
Everybody's Gonna Be Happy
d4
Gonna Leave You (Spanish Version)

Last FM Information on Queens Of The Stone Age

Queens of the Stone Age is a rock band from Palm Desert, California, United States. The band is frequently labeled stoner rock, although they reject the label. They developed a style of riff-oriented, heavy music which the band's founder and mastermind Josh Homme described as "robot rock", saying that he "wanted to create a heavy sound based on a solid jam, just pound it into your head". Since then, their sound has evolved to incorporate a variety of different styles and influences. While in high school, Homme got together with locals Brant Bjork, Chris Cockrell (later replaced by Nick Oliveri) and John Garcia resulting in the formation of Kyuss (firstly known as "Sons of Kyuss"). Queens of the Stone Age formed in 1997, rising from the ashes of Kyuss and began playing together during the now legendary Desert Sessions. Homme has drawn all of the members from that diverse group of musicians for Queens of the Stone Age. The band originally formed under the name Gamma Ray, but almost faced a lawsuit from the European metal band of the same name. Queens of the Stone Age have gone through many line-up changes since first breaking into the hard rock scene. Their most recent line-up includes: Josh Homme (guitar, vocals), Troy Van Leeuwen (guitar, lap steel, keyboards, backing vocals), Jon Theodore (drums, percussion), Michael Shuman (bass, backing vocals), and Dean Fertita (keyboards, guitar, backing vocals). Former core members include Joey Castillo, Alain Johannes, Natasha Shneider, Mark Lanegan, and Nick Oliveri, among other members and contributors. In 2002, regarding the band line-up, Homme said: "It really is more of a musical experiment… It keeps moving and reinventing itself. That way we never get painted into a corner." Dave Grohl recorded drums, percussion and backing vocals on Songs for the Deaf and toured in support of the album in 2002 before returning to the Foo Fighters. Grohl also made a live appearance in 2007, to play Make It wit Chu, and recorded tracks on …Like Clockwork, following Joey Castillo's departure. Mark Lanegan has long been an on/off vocalist for the band, toured from 2001 to 2005 and made live appearances in 2007 and 2010. He has recorded with the band on all albums except for their self-titled debut album. Lanegan has also played keyboards in live performances during the tour preceding the release of Lullabies to Paralyze, before Natasha Shneider joined the band. Josh Homme and Nick Oliveri were seen as the only two consistent Queens of the Stone Age members. Oliveri had previously played alongside Homme in the band Kyuss and joined Queens of the Stone Age as its permanent bass guitarist and co-lead vocalist, in 1998, upon the release of its debut album, Queens of the Stone Age. Being friends since childhood, the two meshed well together. Oliveri's punk background brought an element of danger and attitude to the Queens' live shows. As the band's two core members, the duo recorded the breakthrough albums, Rated R and Songs for the Deaf, together. Oliveri's unique "howling" singing style made him easily distinguishable on songs such as Six Shooter from the album Songs for the Deaf; he also displays a more melodic singing style in Rated R songs such as Auto Pilot. However, Homme fired Oliveri in 2004 for excessive partying and an alleged incident of domestic abuse (an accusation which Oliveri strongly denies). The duo repaired their friendship shortly afterwards. Oliveri, however, did not return to the band. In 2013, upon hearing that former contributor Dave Grohl was recording drums for the band's sixth studio album, …Like Clockwork, Oliveri asked Homme if he too could return on bass guitar. Homme ultimately did not grant Oliveri's request. He does, however, appear on backing vocals on the album track, If I Had a Tail. Diskographie: 1997 - Kyuss / Queens of the Stone Age 1998 - Queens of the Stone Age / Beaver Split 1998 - Queens of the Stone Age 2000 - Rated R 2002 - Songs for the Deaf 2002 - Sample This School Boy 2002 - 2002-10-29: Rock City, Nottingham, UK 2002 - 2002-11-06: Stockholm, Sweden 2003 - Songs For The Deaf Tour Edition 2004 - Stone Age Complication 2005 - Lullabies to Paralyze 2005 - Lullabies To Paralize Tour Edition 2005 - MTV Unplugged (Berlin 2005-06-10) 2005 - Over the Years and Through the Woods 2006 - 2005-12-20: Los Angeles, CA, USA 2006 - Over The Years And Through The Woods 2007 - The Definitive Collection Of B-sides & Rarities 2007 - Era Vulgaris 2008 - Era Vulgaris Tour Edition 2013 - ...Like Clockwork 2017 - Villains Read more on Last.fm. User-contributed text is available under the Creative Commons By-SA License; additional terms may apply.

OTHER RELEASES ON AAA RECORDINGS OR BY QUEENS OF THE STONE AGE:

We have many other items in stock by Queens Of The Stone Age and on the label AAA Recordings.