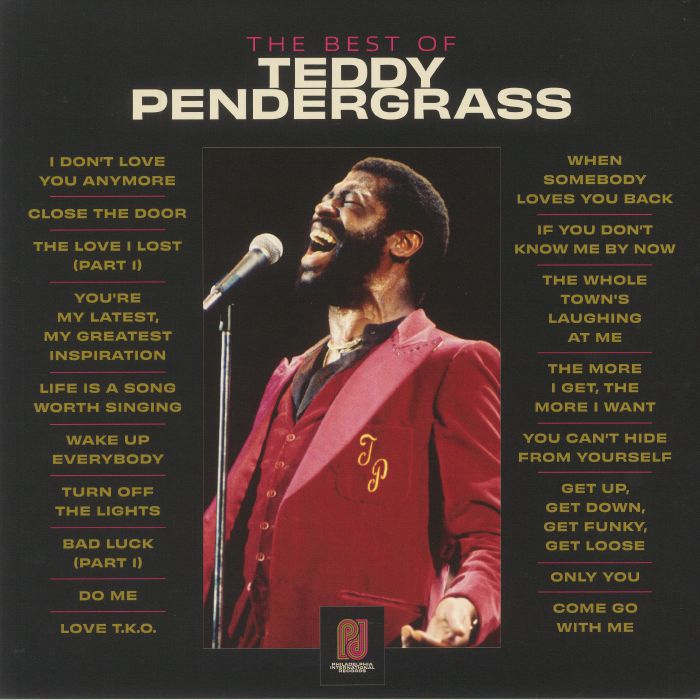 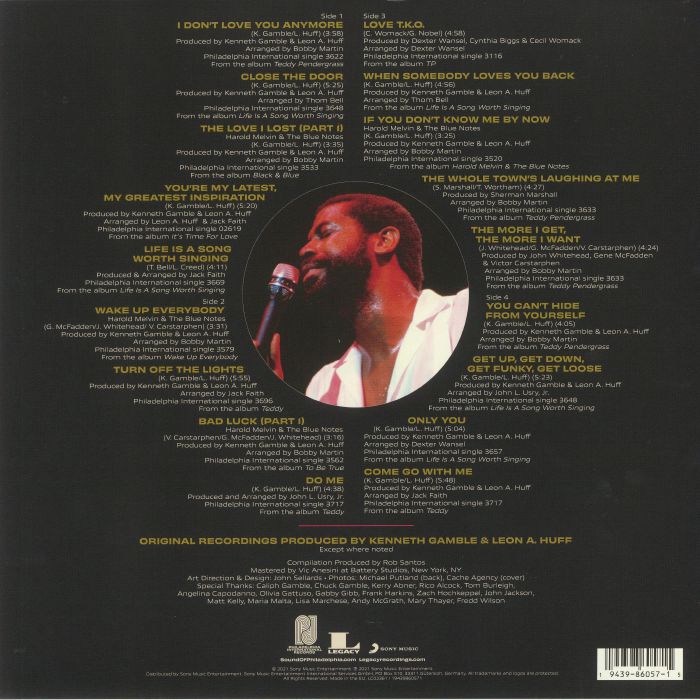 - NEW RELEASE
Sorry, this item is currently unavailable.
ARTIST:
Pendergrass, Teddy
TITLE:
The Best Of Teddy Pendergrass
LABEL:
Sony
CATNO:
19439859861
STYLE:
Soul / R&B /
FORMAT:
Vinyl record
DESCRIPTION:
Soul / R&B Best OF LP From Philadelphia International Records, Back Catalog, from Soul Giant 2x 12 " LP - An 18 track double black vinyl LP compilation featuring many of the beloved singer’s hits including "I Don’t Love You Anymore", "Close the Door", “Turn Off the Lights,”Lights“, "Love TKO", “Come Go With Me”, “Get Up, Get Down, Get Funky, Get Loose” and his classics with Harold Melvin the Blue Notes such as “If You Don’t Know Me by Now".

PLAY
CUE
MP3
a1
I Don't Love You Anymor3
a2
Close The Door
a3
The Love I Lost (part 1)
a4
You're My Latest, My Greatest Inspiration
a5
Life Is A Song Worth Singin
b1
Wake Up Everybody
b2
Turn Off The Light
b3
Bad Luck (part 1)
b4
Do Me
c1
Love TKO
c2
When Somebody Loves You Back
c3
If You Don't Know Me By Now
c4
The Whole Town's Laughing At Me
c5
The More I Get, The More I Want"
d1
You Can't Hide From Yourself
d2
Get Up, Get Down. Get Funky, Get Loose
d3
Only You
d4
Come Go With Me

Theodore "Teddy" DeReese Pendergrass, Sr. (born March 26, 1950 in Philadelphia, Pennsylvania, died January 13, 2010) was an American Grammy nominated R&B soul singer-songwriter. Pendergrass' career began when he was a drummer for The Cadillacs, who soon merged with fellow soul band Harold Melvin & the Blue Notes. After a stellar early 70s run including the Grammy-nominated hit If You Don't Know Me by Now, Teddy went solo in 1976. He released a total of fifteen solo studio albums including hits like Love T.K.O.. A car accident in 1982 damaged his spinal cord and left him paralyzed from the waist down with limited use of his arms. His initial rise to stardom occurred under tutelage of producer's Kenny Gamble & Leon Huff on the then CBS subsidiary Philadelphia International in 1970. The Blue Notes had hits such as "I Miss You," "Bad Luck," "Wake Up Everybody," the two million seller "If You Don't Know Me By Now" and many more. Following personality conflicts between Melvin and Pendergrass, Pendergrass launched a solo career and released hit singles like "The More I Get the More I Want," "Close the Door," "I Don't Love You Anymore," "Turn Off the Lights" and others. His first solo album was self titled Teddy Pendergrass (1977), followed by Life is a Song Worth Singing (1978), Live! Coast to Coast and Teddy (1979), 1980's TP and the final Philadelphia International Records album It's Time for Love (1981). He also sang a duet with Whitney Houston on "Hold Me," from her self-titled debut album. Teddy Pendergrass started singing gospel music in Philadelphia churches, becoming an ordained minister at ten years old. While attending public school, he sang in the citywide McIntyre Elementary School Choir and in the All-City Stetson Junior High School Choir. A self-taught drummer, Pendergrass had a teen pop vocal group when he was 15. By his late teens, Pendergrass was a drummer for local vocal group the Cadillacs. In the late 60s, the Cadillacs merged with another more-established group, Harold Melvin & the Blue Notes. In 1970, when the Blue Notes broke up, Melvin, now aware of Pendergrass' vocal prowess, asked him to take the lead singer spot. It's no secret that Kenneth Gamble and Leon Huff wanted Marvin Junior of the Dells for their Philadelphia International Records roster. Since the Dells were signed to Chess, they were unavailable. When the gruff'n'ready vocals of Pendergrass came their way, they eagerly signed the group. Beginning with "I Miss You," a steady stream of hit singles flowed from the collaboration of Pendergrass and Gamble & Huff: "If You Don't Know Me By Now," "The Love I Lost," "Bad Luck," "Wake Up Everybody" (#1 R&B for two weeks in 1976), and two gold albums, To Be True and Wake Up Everybody. Unfortunately, the more success the group had, the more friction developed between Melvin and Pendergrass. Despite the revised billing of the group, Harold Melvin & the Blue Notes featuring Theodore Pendergrass, Pendergrass felt that he wasn't getting enough recognition. Around 1976, Pendergrass left Melvin's Blue Notes and formed his own Blue Notes, featuring Teddy Pendergrass. Briefly, there was some confusion as to which Blue Notes was which. The resolution came when Pendergrass disbanded his Blue Notes in favor of a solo career and Melvin's group signed a recording contract with Source Records, distributed through ABC Records, scoring a hit with "I Want to Be Your Lover." Pendergrass signed a new contract with Philadelphia International Records sometime between late 1976 and early 1977. He burst back on the scene with Teddy Pendergrass, a platinum solo debut that included the top-notch singles "I Don't Love You Anymore," "You Can't Hide From Yourself," and "The More I Get the More I Want." Around this time, Pendergrass began to institute his infamous "Ladies Only" concerts. His next three albums went gold or platinum: Life Is a Song Worth Singing, Teddy, and Live! Coast to Coast. The hit single "Close the Door" was used in the film Soup for One, where Pendergrass had a minor role. The singer received several Grammy nominations during 1977 and 1978, Billboard's 1977 Pop Album New Artist Award, an American Music Award for best R&B performer of 1978, and awards from Ebony magazine and the NAACP. He was also in consideration for the lead in the movie biopic The Otis Redding Story. The '70s ended, but Pendergrass kept racking up the hits. TP, his fifth solo album, went platinum in the summer of 1980 off the singles "Turn Off the Lights," "Come Go With Me," "Shout and Scream," "It's You I Love," and "Can't We Try." It's Time for Love gave Pendergrass another gold album in summer 1981, which included the hit singles "Love TKO" and "I Can't Live Without Your Love." However in the UK chart success was limited to a handful of singles peaking just short of the top 40. Amazingly "Love TKO" failed to even grace the top 100. A 1982 car accident left Pendergrass paralyzed from the waist down and wheelchair-bound. After almost a year of physical therapy and counseling, Pendergrass returned to the recording scene, signing a contract with Elektra/Asylum in 1983. His ninth solo album, his Elektra/Asylum debut, Love Language went gold the spring of 1984. Philadelphia International issued two albums of unreleased tracks, This One's for You (1982) and Heaven Only Knows (1983). Other albums included Workin' It Back (1985), Joy (1988, whose title track stayed at #1 in the R&B charts for two weeks), and A Little More Magic (1993). The latter half of '90s found Pendergrass recording for the Surefire/Wind Up label. Truly Blessed (the name of an 1991 Elektra album) is the title of the autobiography Pendergrass co-authored with Patricia Romanowski. Pendergrass passed away at age 59 on January 13, 2010 from complications following surgery for colon cancer. Read more on Last.fm. User-contributed text is available under the Creative Commons By-SA License; additional terms may apply.
FREE SHIPPING ON ORDERS OVER £100 TO UK MAINLAND ONLY
See exclusions
View Cart