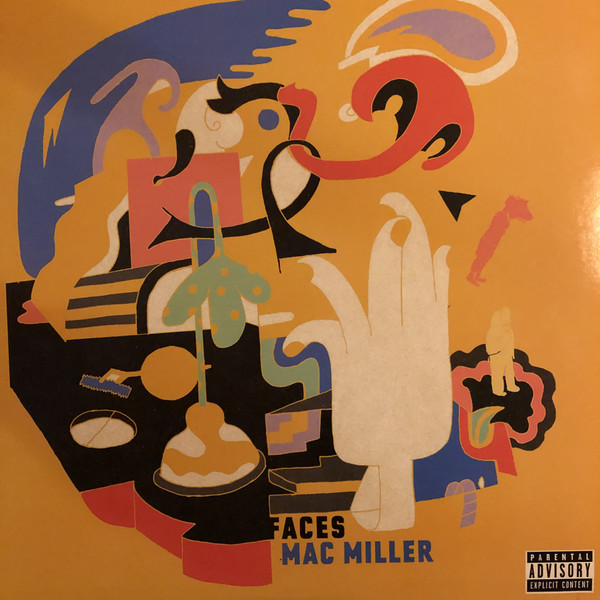 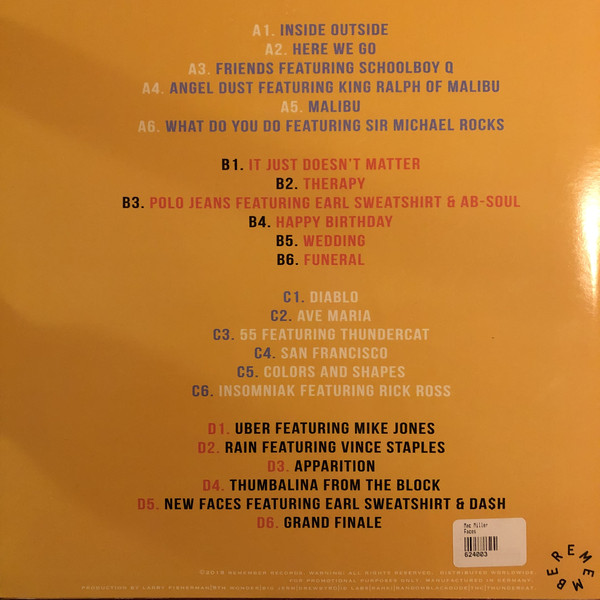 Mac Miller’s most ambitious post-Watching Movies project arrived in the form of a Mother’s Day mixtape called Faces, which advances on his last LP's heady sprawl with a palette stretching from rainy day introspection to playful wordplay exercises. Where Watching Movies was equally concerned with refining his writing skills and presenting a personality you wouldn’t mind sparking up a j with, this mixtape prizes frankness over curation. On cuts like opener “Inside Outside” and “Here We Go”, the latter in which Mac pridefully scans his growing empire and notes that he “did it all without a Drake feature”, the joy is infectious.

Malcolm McCormick, also known by his stage name Mac Miller, was an American rapper, singer-songwriter and record producer from Pittsburgh, Pennsylvania. He was also a noted record producer under the pseudonym Larry Fisherman. Raised Jewish and teaching himself music from a young age, McCormick defied the stereotypes of hip-hop and released his first mixtape under the name EZ Mac, titled "But My Mackin' Ain't Easy" in 2007, when McCormick was only fifteen. He released many more in his lifetime, including "K.I.D.S." in 2010, which earned Mac widespread attention in the hip-hop scene, and "Best Day Ever" in 2011, which featured the hit single "Donald Trump". He was signed to Pittsburgh-based Rostrum Records and released his debut album Blue Slide Park on November 8, 2011, which debuted at number 1 on the Billboard 200 despite being released completely independently. He released five studio albums in his lifetime, which all peaked in the top 5, along with a posthumous album titled "Circles" with help from producer Jon Brion and Miller's family. In 2013, Miller released his second studio album, "Watching Movies With the Sound Off". The album featured artists such as Earl Sweatshirt, Tyler the Creator, Ab-Soul, and long-time friend Schoolboy Q. The album took a more personal approach compared to his previous works. In 2014, Miller released the 24-track mixtape "Faces". Considered by many to be one of his best works, he explores themes of drug use, employing and featuring collaborators of Mac from his previous album, including Schoolboy Q and Earl Sweatshirt, but also sees new faces such as Rick Ross. In 2015, Mac released his third studio album, "GO:OD AM", his first with new label Warner Records. The album featured a more energetic and vibrant theme than "Faces" and "Watching Movies With The Sound Off", reflecting a more optimistic, redemptive angle on his personal life, while maintaining elements of his introspective and thought-provoking style from earlier works. In 2016, Miller released his fourth studio album, titled "The Divine Feminine". He explores themes of love and femininity, largely influenced by his relationship with Ariana Grande at the time and featuring appearances from the likes of Kendrick Lamar and Anderson Paak. In August 2018, following major events in Miller's life, including his breakup with Ariana Grande, with Miller's drug addiction alleged to be a contributing factor, as well as a car crash incident in which McCormick was charged with a DUI, Miller released his fifth and final studio album during his lifetime titled "Swimming". Continuing the dive into his personal life, Miller explores his heartfelt struggles and grief in the past, but remains optimistic for the future. Swimming was nominated for Best Rap Album posthumously at the 2019 Grammy Awards. Miller had struggled with substance abuse for a long time before his death. On September 7, 2018, he was found dead in his home in Los Angeles, California from an accidental overdose of fentanyl, cocaine, and alcohol, only a little over a month after the release of "Swimming". He was only 26 years old. McCormick was buried in his hometown of Pittsburgh. Miller's passing was largely unexpected and had a large impact on the hip-hop community as a whole, with many paying their respects to Miller. On October 31, 2018, a tribute concert, titled "Mac Miller: A Celebration of Life", featured renowned artists and many longtime collaborators of Miller including Travis Scott, Schoolboy Q, SZA, Chance the Rapper, and Earl Sweatshirt. The concert was a celebration of the late rapper's life and musical achievements, and all profits were donated to the Mac Miller Circles Fund, which provides young people from underprivileged backgrounds with opportunities to explore arts and music. In January 2020, Miller's posthumous album titled "Circles", worked on in companionship with his album "Swimming", was announced on January 8 along with the single "Good News" and released later that month. Every track on the album was accompanied by a video of the same name, often with psychedelic imagery and images of Mac before his passing and throughout his life. With a more melancholic theme compared to his previous works, the album was well-received by fans and critics alike, renowned for the care placed in continuing Mac's artistic vision. Read more on Last.fm. User-contributed text is available under the Creative Commons By-SA License; additional terms may apply.

OTHER RELEASES ON AAA RECORDINGS OR BY MAC MILLER:

We have many other items in stock by Mac Miller and on the label AAA Recordings.