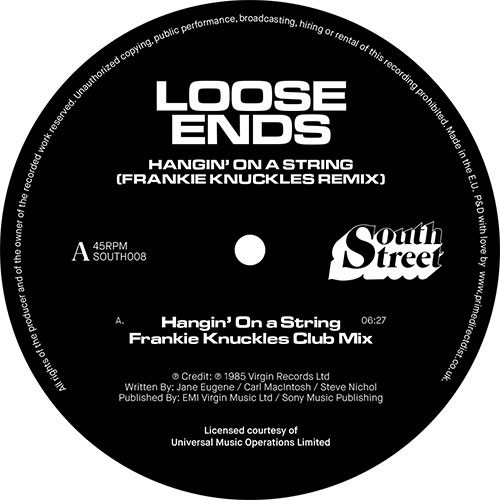 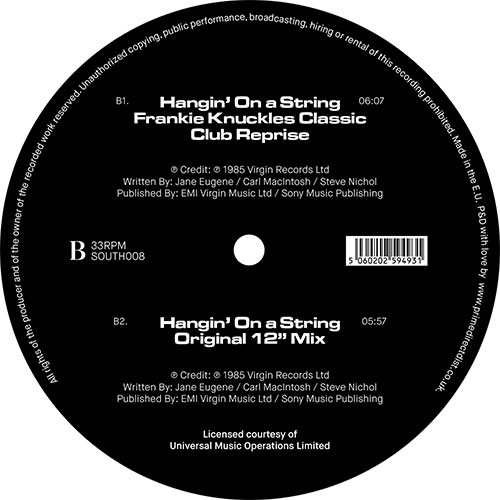 - NEW RELEASE
Sorry, this item is currently unavailable.
ARTIST:
Loose Ends
TITLE:
Hangin' On A String (Frankie Knuckles Remix)
LABEL:
South Street
CATNO:
SOUTH008
STYLE:
Soul / Deep House /
FORMAT:
Vinyl record
DESCRIPTION:
1985 Soul Classic Gest TEh Frankie Knuckles Treatment - Also Inc Vocal 12" Original Mix - Take a much-loved UK soul gem, Loose Ends classic from ‘85 ‘Hangin’ On A String’ and hand it to the godfather of house, Frankie Knuckles to work his unquestionable magic and there was no doubt the result would be a slice of house music heaven. South Street Records unlock the vaults once again, reissuing this melding of transatlantic minds presenting a triple threat that sees both Frankie’s 1992 Club Mix and the elusive Classic Club Reprise sit alongside the Loose Ends Original 12 Inch Mix, on either side of a 12 inch.

Taking the best of London’s soul and coupling it with the heart of Chicago, the master Frankie Knuckles purrs this one out across the highways with a slung-back house interpretation of ‘Hangin’ On A String’. A bumping beat, punchy bass line and effortless percussive touches give the perfect platform for Loose End’s vocal dynamics to provide a power, emotion and sincerity often lacking in modern dance music.

Flip it over to find the Classic Club Reprise - straight up sunset business with Frankie side-lining the vocals to let the instrumentation sing with added trademark flourishes in true spiritual style. Finally, the Original 12 Inch Mix gets a well-deserved inclusion which, back in 1985 was a true game changer bridging a multiplicity of scenes in the UK with its use of drum machines and synthesizers whilst maintaining that pure soul vibe. A track that topped the US Billboard R&B chart, making Loose Ends the first ever British band to do so, it’s a UK soul classic drenched in drum machine hits, soaring synths and crunchy guitar licks that’s infused with an ‘80s electro style and a quintessentially London flavour.

There is at least three bands / artists called Loose Ends. 1. One of the top British dance and urban contemporary trios in the early 1980s, Loose Ends formed in London, United Kingdom. They were originally called Loose End and included Carl McIntosh, Jane Eugene and Steve Nichol. Virgin signed them in 1981, and their début was written by Chris and Eddie Amoo. The group changed its name to Loose Ends in 1983 and signed with MCA in America in 1984. Their single 'Hanging on a String (Contemplating)' topped the R&B charts in 1985, and they repeated that achievement in 1986 with 'Slow Down'. Their last hit was 'Watching You' in 1988, which reached number two. The group shuffled its line-up in 1990 for the release of the album, Look How Long, with McIntosh now joined by Linda Carriere and Sunay Suleyman. McIntosh also produced several artists, notably Caron Wheeler. 2. Formed in Bexley Heath, Kent, United Kingdom, in late 1963, Loose Ends were led by singer Alan Marshall. By the time they landed a semi-residency at the Mayfair club, The Scotch of St. James (in February 1966) the group had signed to Decca. A July 1966 début single ('Send The People Away' b/w 'I Ain't Gonna Eat Out My Heart Anymore') while the group's soulful rendition of George Harrison's 'Taxman' curiously came out on 5 August 1966, the same day The Beatles' version came out on their 'Revolver' LP. The band fell apart in the autumn of 1966. Marshall assembled a new Loose Ends (with the aid of a Croydon band called The Subjects), while keyboardist Roy Davies and bassist Dave Collman formed a rival line-up, almost inevitably called New Loose Ends. 3. Loose Ends was an early / mid 1980s influenced hardcore punk band from central New Jersey, NJ. United States. Their first EP, 'Cut Loose', was released in 2011. Read more on Last.fm. User-contributed text is available under the Creative Commons By-SA License; additional terms may apply.
FREE SHIPPING ON ORDERS OVER £100 TO UK MAINLAND ONLY
See exclusions
View Cart