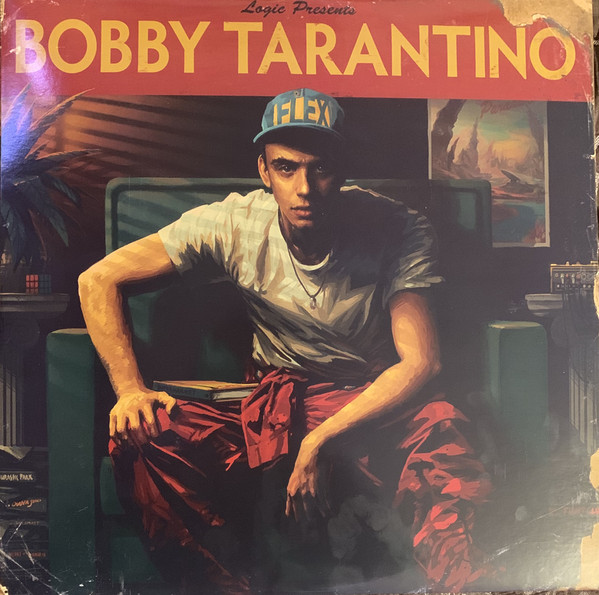 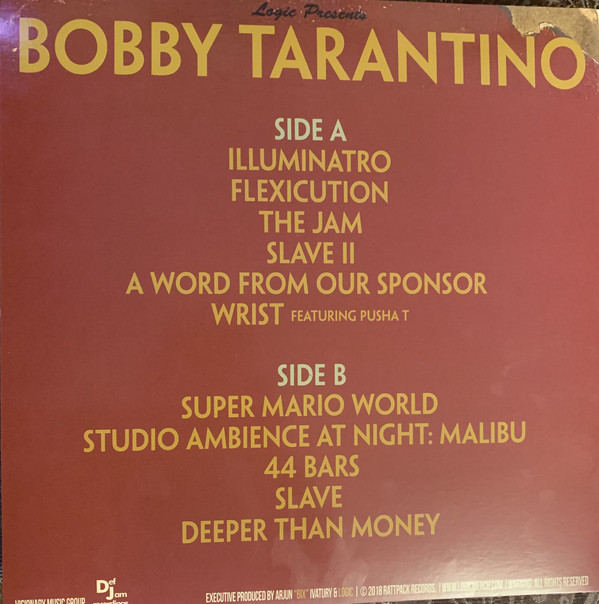 Hip Hop / Trap / R&B - After topping the R&B/Hip-Hop charts in 2015 with his sci-fi concept sophomore album, The Incredible True Story, Logic returned the following year with his fifth mixtape, Bobby Tarantino. His seventh release in as many years and fifth mixtape overall, Bobby Tarantino arrived unexpectedly in July on Def Jam/Visionary Music Group. Even without prior notice, it debuted at number 16 on the Billboard 200. Featuring "Flexicution," his first Billboard Hot 100 solo single, the mixtape also featured spots by Pusha T ("Wrist"), Juicy J ("Super Mario World"), and vocals from Jessica Andren, John Lindahl, and George DeNoto.

Almost a year after the release of his sophomore album, The Incredible True Story, Logic surprised his fans with his sixth mixtape, Bobby Tarantino on July 1st, 2016.

He explained that this mixtape was for his fans to turn up in the summer via Twitter:

PLAY
CUE
MP3
a1
Illuminatro
a2
Flexicution
a3
The Jam
a4
Slave II
a5
A Word from Our Sponsor
a6
Wrist
b1
Super Mario World
b2
Studio Ambience At Night: Malibu
b3
44 Bars
b4
Slave
b5
Deeper Than Money

Sir Robert Bryson Hall II (born January 22, 1990), known by his stage name Logic, is an American rapper, singer, songwriter, and record producer. Raised in Gaithersburg, Maryland, Logic developed an interest in music as a teenager, and ventured into a musical career in early 2009 releasing Logic: The Mixtape under the name "Psychological", and releasing a mixtape titled Young, Broke & Infamous in 2010. He signed with Visionary Music Group, before releasing three more mixtapes over three years. His fourth mixtape, Young Sinatra: Welcome to Forever (2013), was released to critical acclaim, and allowed Logic to secure a recording contract with Def Jam Recordings. He later released his debut studio album Under Pressure in October 2014, which debuted at number four on the U.S. Billboard 200, eventually becoming certified gold by the Recording Industry Association of America (RIAA) and having sold more than 171,000 copies. Logic's second studio album The Incredible True Story was released in November 2015, receiving mostly positive reviews from critics. Also certified gold in the U.S., it sold over 185,000 copies. Logic released his fifth mixtape, Bobby Tarantino, in 2016. Logic's third studio album Everybody (2017) was his first to debut at number one in the U.S., with 247,000 album-equivalent units, of which 196,000 were pure album sales. The album spawned his first international top 10 single as a lead artist, "1-800-273-8255", which reached the top three on the Billboard Hot 100. On February 23, 2018, Logic released a single titled "44 More". It was a sequel to "44 Bars", a song from Logic's 2016 mixtape Bobby Tarantino. The song peaked at number 22 on the US Billboard Hot 100 chart. The following single, "Overnight", was released four days later on February 27. Logic would eventually release another single titled "Everyday", with record producer Marshmello on March 2. Logic would later announced his sixth mixtape titled Bobby Tarantino II, with a promotional video featuring the characters of the Adult Swim series Rick and Morty, on March 7. Bobby Tarantino II was released on March 9, 2018, through Def Jam and Visionary Music Group. The mixtape featured guest appearances from 2 Chainz, Big Sean, and Wiz Khalifa. On March 30, he was featured in the premier episode of Netflix's original documentary series, Rapture. On September 28, 2018, Logic released his fourth studio album titled, YSIV. Before releasing the project, Logic released three singles: "One Day" featuring Ryan Tedder, "The Return" and "Everybody Dies". The album features the song “Wu Tang Forever” which features all the surviving members of the Wu Tang Clan. On March 16th of 2019, Logic released his debut novel, titled “Supermarket” under Simon and Schuster, which he first teased on the cover of his 2016 mixtape “Bobby Tarantino.” The book was accompanied by his 5th studio album which brought about an experimental sound from logic, featuring little rap and more classic rock and indie sounds. Logic has since announced that he is in the process of writing 2 more novels, one featuring a sci fi theme and the other set to revolve around bank robberies. Logic released “No Pressure”, his sixth and final studio album, on July 24th, 2020. He announced “No Pressure” on July 16th in a tweet where Logic also stated he would be retiring from music to focus on being a father. The album contains fifteen tracks and a total runtime of 59 minutes and 48 seconds. The album came following announcement of Logic’s multi-million dollar deal with Twitch. Logic released his 7th mixtape, Bobby Tarantino III, on July 30th, 2021 following the release of several singles. Logic has also announced an album titled Ultra 85, which currently has no release date. He also has said that he has written and plans to star in his movie. Read more on Last.fm. User-contributed text is available under the Creative Commons By-SA License; additional terms may apply.

OTHER RELEASES ON AAA RECORDINGS OR BY LOGIC:

We have many other items in stock by Logic and on the label AAA Recordings.