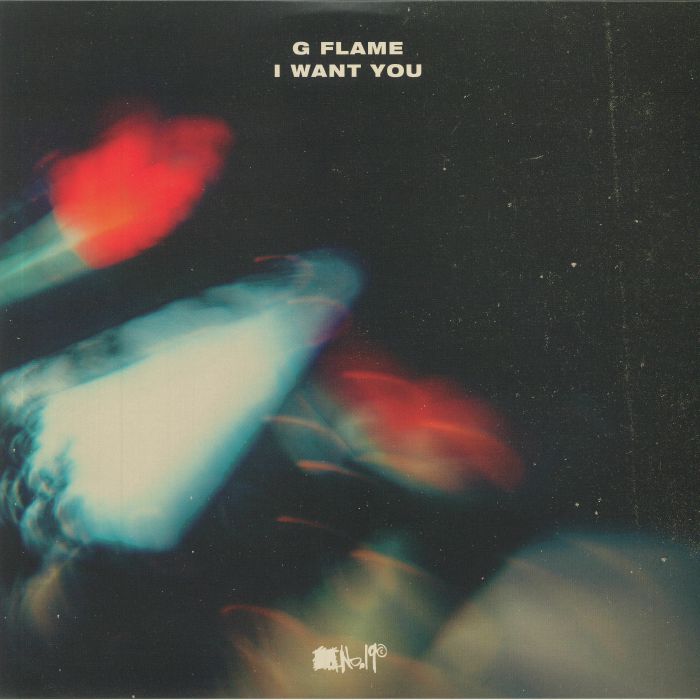 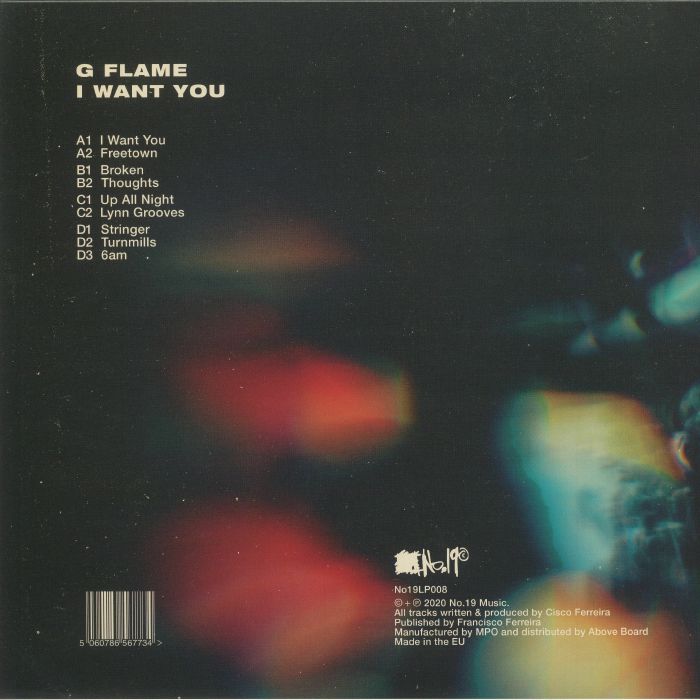 G FLAME - I WANT YOU

- NEW RELEASE
Sorry, this item is currently unavailable.
ARTIST:
G Flame
TITLE:
I Want You
LABEL:
No 19
CATNO:
NO19LP008
STYLE:
Techno / Techno Disco / Deep House / Tech /
FORMAT:
Vinyl record
DESCRIPTION:
Debut LP - Funky Techno, Minimal Deep House & Disco Techno Cuts On This 2x12" LP The legendary G Flame follows up this summer’s debut on No.19 Music with ‘I Want You', a fantastic LP drawn from his musical vaults that proves why the UK based artist is such a vital part of electronic music’s history.

G Flame aka Cisco Ferreira, is the solo artist behind the legendary project, The Advent, which originally included former production partner Mr G. He has long been a pivotal player in the development of house and techno, as a DJ, producer and also an engineer working with greats like Larry Heard, Derrick May and Adonis. Cisco has released on seminal labels such as Jack Tracks, R&S, Novamute and Tresor, has remixed New Order and always brings a unique musical vision to his work.

The legendary G Flame moniker was originally used for Ferreira’s more house infused, techno sound, something he developed in the early 90s. Says the artist, “Back then there were very few tech house tracks being released. At the time I called it 'house techno’ as my main vibe was always house music first, with added techno spice and faster BPMS for DJs.” That description is a simple but effective one that sums up the visceral power of this new record, a record which features tracks predominantly written between 1992 and 1999.

The first two cuts are previously unreleased gems, opening with the ducking and diving drums and intense synth work of 'I Want You', and followed by the old school 909 workout of piano-infused house, ’Freetown.’ The buzzing low frequencies of ‘Broken’ burrows deep into your brain and was released as a single on this label this summer, then come previously vinyl only classics ‘Thoughts’ which brings brilliant dynamics and a pulsing bassline that is overlaid with trippy melodic motifs and sci-fi details, and 'Up All Night,’ which is ghetto house perfection with its bristling drums and percussion, knotted bass and frenzied vocal stabs.

The final four previously unreleased tunes kick off with ‘Lynn Grooves’, a perfectly reduced piece of rubbery techno to get you in a sweat, and ’Stringer,’ another urgent and compelling house cut that races along on slapping drums and scraping hits while subtle vocal sounds add soul to the power of the machines. The stellar ‘Turnmills’, is a loopy, chunky and futuristic wedge of sci-fi tech that is sure to make you march and last of all, the fantastic '6am' is a zoned out affair with far sighted cosmic chords, bumping kicks and more tender vocal sounds that finds, like the rest of the album, a perfect sweet spot between house and techno.

This is an essential collection of music from an artist who has been at the very heart of the house and techno scene for the last three decades, and is sure to enthral both his industry acolytes and new fans alike. It also marks another high point for the ever impressive No.19 Music as we close out 2020.

Real name - Cisco Ferreira. Most good musicians have different musical arms and such is the case with Cisco Ferreira, who records under the name of G Flame (Green Flame). He is also responsible for the cutting edge techno releases of The Advent. With the G Flame project, Cisco is building on his love of music and delving into the past a little. Cisco was involved in the London house music scene back in '88 with Jack Tracks Records, London, working as a sound engineer for artists such as Larry Heard, Adonis & Derrick May, before embarking on his own. Cisco then began producing / remixing on various other labels such as R & S, Novamute, Polygram, Fragile, Tresor, Network Records & remixes for New Order, Humate, C J Bolland & Steve Hillage. Deeply entrenched in the early underground house scene G Flames mission is a statement about the nature of that original vibe. He is very much a music lover and a club person " I think it's all about music and the grooves. What is house? It all depends on how you feel your house, and if you feel it's slow/ fast/ hard/ soft then fine. It should be each to his own". The project (G Flame) began in '97 with the release of six EP's and one LP "Who Knows G" on BMG (Metal Box) collaborating with Mr G. Since then there have been further G Flame releases and remixes for various labels; Strive Records (Simon Digby remix), Ignacio remix (Music Man).. e.p's. on Moody Records, Bush Records & Koas Records (Portugal). Read more on Last.fm. User-contributed text is available under the Creative Commons By-SA License; additional terms may apply.
FREE SHIPPING ON ORDERS OVER £100 TO UK MAINLAND ONLY
See exclusions
View Cart