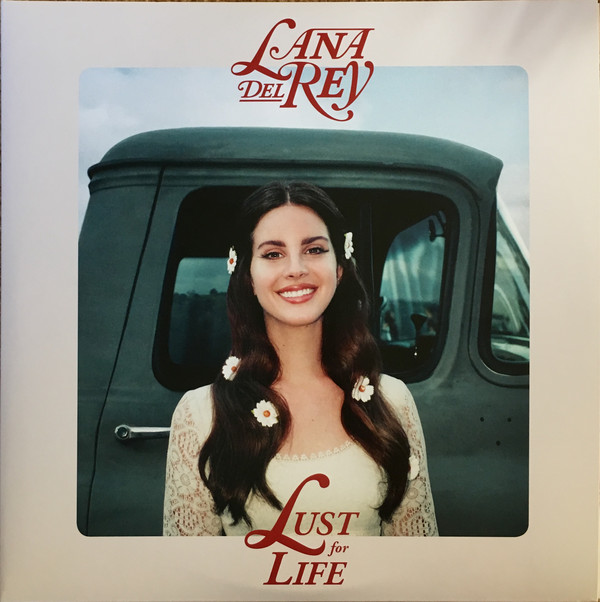 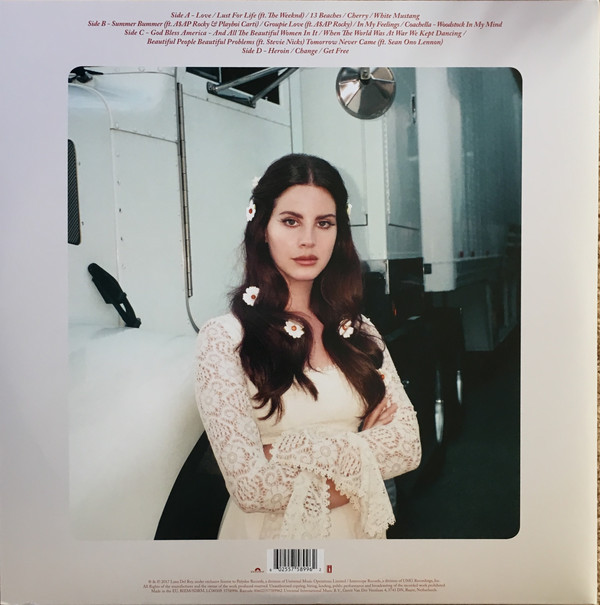 - NEW RELEASE
Sorry, this item is currently unavailable.
ARTIST:
Del Rey, Lana
TITLE:
Lust For Life
LABEL:
Polydor
CATNO:
5758996
STYLE:
Alternative Rock / Downbeat Electronica /
FORMAT:
Vinyl record
DESCRIPTION:
2x12" Alternative Rock / Downbeat Electronica - Lana Del Rey knows perfectly well her Lust for Life sounds sleepy in comparison to Iggy Pop's full-blooded roar, but that doesn't mean the title of her fourth album is ironic. Compared to her previous albums, especially its somnolent 2015 predecessor, Honeymoon, Lust for Life is positively ebullient in tone, if not in tempo. Lana Del Rey may sing about a "Summer Bummer" but the song isn't in sway to a narcotic undertow; it simmers, offering a cool bit of seduction for muggy August nights. LDR retains this delicate balance throughout the lengthy Lust for Life (at 71 minutes, this is an album as playlist, designed to be looped over and over as mood music), never quite succumbing to either despair or ecstasy but rather finding a place where there's no separation between the two emotions. That said, Lana Del Rey does lean toward pleasure on Lust for Life, luxuriating in her slow rhythms and shimmering surfaces. What once seemed icy -- the glassy gloss, the sighing melodies, her persistent murmur -- now exudes warmth, where even the Weeknd's spectral falsetto on the title track feels alluring. LDR manages to sustain this mood over the course of 16 songs, every one of which is a gentle variation of her supple signature. Sometimes, the tracks are graced by a guest -- in addition to the Weeknd, A$AP Rocky shows up on two songs, Sean Ono Lennon on another, while Stevie Nicks stops by for "Beautiful People Beautiful Problems" -- but usually what sticks is an escalating chorus or a hook that echoes in the distance. If Lust for Life starts to slow down toward its conclusion -- "Tomorrow Never Came" seems like the logical conclusion, but there's a three-track coda afterward -- it nevertheless delivers upon its promise of a sunnier Lana Del Rey, and the very fact that she can find so many textures in a deliberately limited palette is impressive.

Elizabeth Woolridge Grant, known professionally as Lana Del Rey, is an American singer and songwriter. Her music is noted for its cinematic quality and exploration of tragic romance, glamour, and melancholia, containing references to contemporary pop culture and 1950s and 1960s Americana. She is the recipient of various accolades, including two Brit Awards, two MTV Europe Music Awards, and a Satellite Award. She has been nominated for six Grammy Awards and one Golden Globe Award. She also has been recognised with the Variety's Decade Award at the Variety Hitmakers Awards for being ″regarded as one of the most influential singer-songwriters of the 21st century″. Sirens (as pseudonym of May Jailer) (2006) "Sirens" is an unpublished album by American singer-songwriter Lana Del Rey, under the pseudonym May Jailer. Recorded in 2005, its release took place unofficially, after being cast on YouTube in May 2012. Kill Kill (EP) (2008) "Kill Kill" is the first extended play (EP) of American singer-songwriter Lana Del Rey. Released on October 21, 2008, through 5 Points Records, while Del Rey used the stage name Lizzy Grant. The EP contains three tracks, all of which were included in their debut album titled, Lana Del Ray A.K.A. Lizzy Grant (2010). Yayo was re-recorded and included in the singer's third EP, Paradise (2012). "Kill Kill" was the EP's only single. A video for the track was published in 2008. Lana Del Ray A.K.A. Lizzy Grant (2010) "Lana Del Ray a.k.a. Lizzy Grant" is the first album by American singer Lana Del Rey. The album was only released as a digital download on January 4, 2010 under the name Lizzy Grant by the independent record company 5 Points Records. The album was digitally released through iTunes, which was sold briefly before being removed after the publisher could no longer promote the album. After releasing Born to Die (2012) under the stage name Lana Del Rey, she spoke in an interview that, in short, would like to relaunch the album. Lana Del Rey (EP) (2012) "Lana Del Rey EP" is the second extended play (EP) of the singer and American writer Lana Del Rey. It was released on January 10, 2012 in the United States by Stranger Records and Interscope Records. The EP has four tracks and was released to anticipate the debut of Lana Del Rey on a major label. Musically, it is an indie pop work, influenced by several genres like baroque pop and alternative hip-hop, while its lyrical content is mostly about love. Born to Die (2012) In June 2011, Del Rey was signed with Stranger Records and issued the “Video Games” single. In October 2011 she signed with Interscope Records. Her next album, "Born to Die", was released worldwide on 31 January 2012 under Interscope. The second single and title track, "Born to Die," was released on January 27, 2012. Ultraviolence (2014) "Ultraviolence" was released on June 13, 2014. The album was produced by Dan Auerbach (from The Black Keys). Honeymoon (2015) "Honeymoon" is the fourth studio album by Del Rey, released on Sept 18, 2015 on the UMG. It was produced by Del Rey together with Rick Nowels and Kieron Menzies. Lust for Life (2017) Early in 2017, Del Rey released her first single since 2015, called “Love”. The track was produced by Del Rey, Rick Nowels, Benny Blanco, Emile Haynie and Kieron Menzies. The album, "Lust for Life", released on 21 July 2017. Norman Fucking Rockwell! (2019) Mostly produced by Del Rey and Jack Antonoff, Lana released her sixth studio album “Norman Fucking Rockwell!” on August 30th 2019. The album received widespread critical exclaim, garnering the highest Pitchfork score for a solo female artist this decade with a 9.4. Chemtrails over the Country Club (2021) "Chemtrails over the Country Club" is the seventh studio album by Del Rey, released on March 19, 2021. Initially titled White Hot Forever, the album is produced by Del Rey and Jack Antonoff and features additional production contributions from Rick Nowels whom Del Rey worked with on past studio albums. Blue Banisters (2021) Blue Banisters is the eighth studio album by American singer-songwriter Lana Del Rey. It was released on October 15, 2021 in Canada and October 22 worldwide, by Interscope and Polydor Records, seven months after her previous record, Chemtrails over the Country Club. Read more on Last.fm. User-contributed text is available under the Creative Commons By-SA License; additional terms may apply.
FREE SHIPPING ON ORDERS OVER £100 TO UK MAINLAND ONLY
See exclusions
View Cart