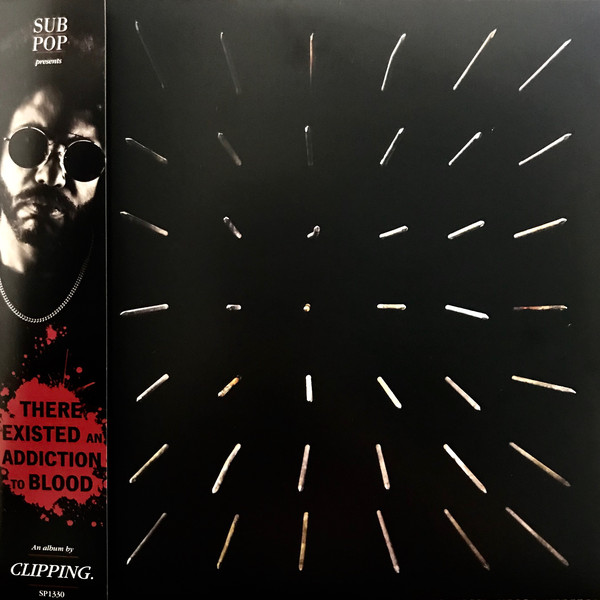 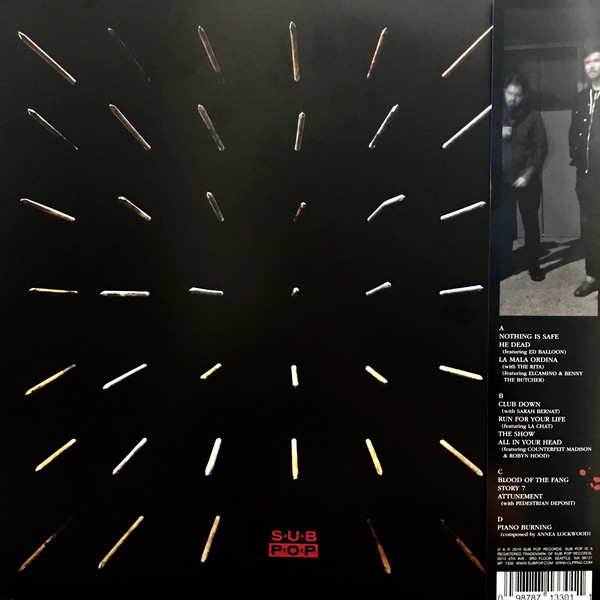 CLIPPING - THERE EXISTED AN ADDICTION TO BLOOD

Well, kind of. They haven’t gone big in the bass/club banger sense, but more in their vision and ideas. Let’s face it Clipping have never really played it safe, but on ‘There Existed An Addiction To Blood’ you get the feeling they have got to a place where they don’t care and are doing what excites them.

And what excites the group this time round is the horrorcore genre of hip-hip, an outlandish pocket made popular by the Gravediggaz in the mid-to-late 90s. Traditionally the lyrics were slightly ghoulish, and cartoony, in places but the music was a bit more out there and gritty and grim. And this is what Clipping has effectively delivered. 18 tracks of gritty and grim hip-hop.

After a few tracks, and interludes, the album really comes along with ‘La Mala Ordina’. Here Huston and Snipes use brutal baselines and disjointed beats dirty atmospherics, wonky loops gently fade in before Diggs' laconic vocals kick in.

As on previous releases Clipping have brought some friends along. This isn’t just an exercise in showing who is in their musical rolodex, although there is a bit of that, ‘La Mala Ordina’ benefits from the guest spots, notably The Rita, as the outro is sheer noise. And it is glorious for it.

This is followed up by ‘Club Down’. Here Diggs really shows what he can do lyrically. In the opening 90 seconds Diggs references A.A. Milne, Gene Kelly, Singing in the Rain, Fabergé eggs, and children suffering from colic, before a brutal dissection of gang life, all being backed by one of the most terrifying and abrasive backing tracks on the album. Flawless.

While the tracks are elevated by having the likes of Ed Balloon, Counterfeit Madison join The Rita, Benny the Butcher, La Chat and ELCamino appear, the music doesn’t really need the outside influences as the songs are so strong as they are and Diggs is more than capable of holding his own and keeping us focused and riveted. The guest spots are welcomed, as they add another level of texture and tone to the songs, but if they hadn’t been there, minus The Rita and La Chat, the song would have been just as song and exhilarating.

After the initial listen ‘There Existed An Addiction To Blood’ feels like a cacophony of discordant noises/productions and Diggs’ aggressive lyrics just going at it, but after a few more listens everything starts to take shape and it dawns on you that everything is perfectly measured and balanced. When this happens the album suddenly becomes something else. Yes it is terrifying in places, and yes the music is abrasive, and at times avant-garde, but nothing is in there by chance.

Everything has been meticulously planned out and delivered to the letter, apart from album closer ‘Piano Burning’. As the title suggests this is the sound of a piano burning and was originally conceived by avant-garde composer Annea Lockwood. For 18 minutes we are lost in the sound of gently roaring fires and a piano turning into kindling and ash.

On the surface this feels like filler and could easily been removed to make the album flow and come to a more direct conclusion. But this isn’t the point of Clipping, or ‘There Existed An Addiction To Blood’. There is tension from hearing a random string snap, or when a section falls to the floor, and this is what Clipping are trying to do. They are trying to show that from minimal elements, and chance, you can create something compelling and captivating.

At its core ‘There Existed An Addiction To Blood’ is an avant-garde experiment into tones and sounds that has been dressed up as a hip-hop album. And it works incredibly well. The lack of beats, or beats in a traditional sense, is impressive and should be admired.