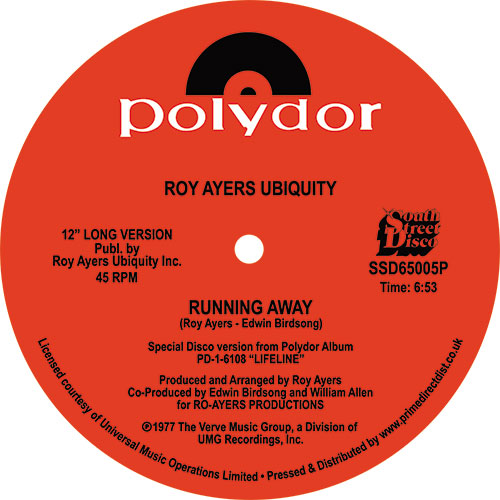 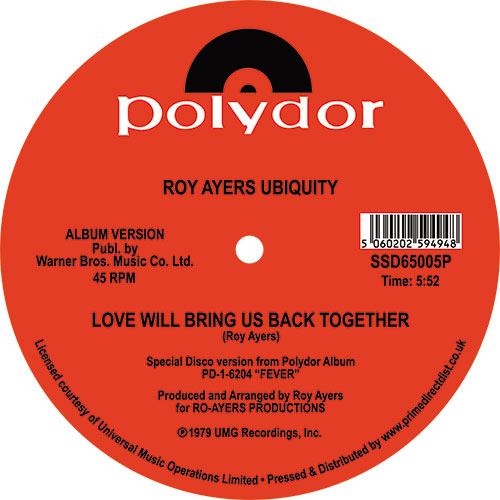 AYERS, ROY - RUNNING AWAY / LOVE WILL BRING US BACK TOGETHER

- NEW RELEASE
Sorry, this item is currently unavailable.
ARTIST:
Ayers, Roy
TITLE:
Running Away / Love Will Bring Us Back Together
LABEL:
South Street Disco
CATNO:
SSD65005P
STYLE:
Soul / Funk /
FORMAT:
Vinyl record
DESCRIPTION:
1977/ 1979 Soul Disco Cuts Repressd -Two stone cold Roy Ayers classics get the South Street Disco official reissue treatment, one side the feel-good disco-tinged, jazz funk fire ‘Running Away’ and the other the smooth groove, love letter funk bomb ‘Love Will Bring Us Back Together’. Melting hearts, melting minds, is there a better Valentines gift out there then two slices of joy from Roy?

From hip hop to house, ‘Running Away’ has been a favoured sampling treasure since it came out in 1977. Co-produced alongside Edwin Birdsong and William Allen, joyous vocal harmonies dance around grooving basslines, strutting guitar riffs and Roy’s warm soothing tones. Top it off with some trademark vibes and it’s a one-way ticket to happiness, pure sunshine smiles all round.

Flip it to find ‘Love Will Bring Us Back Together’. Straight up seductive business co-produced by Carla Vaughn. It’s silky, it’s smooth, it’s everything you want it to be and more. Clavinet wizardry, buttery Rhodes layers and fiery vocals. Loved up funk at it’s best.

Roy Ayers (September 10, 1940) is an American funk, soul, and jazz composer and vibraphone player. Ayers began his career as a post-bop jazz artist, releasing several albums with Atlantic Records, before his tenure at Polydor Records beginning in the 1970s, during which he helped pioneer jazz-funk with his band Roy Ayers Ubiquity. He is a key figure in the acid jazz movement, which is a mixture of jazz into hip-hop and funk, and has been dubbed by many as "The Godfather of Neo Soul". He is most well known for his signature compositions "Everybody Loves The Sunshine" and "Searchin", and is also famous for having more sampled hits by rappers than any other artist. Roy Ayers was born in Los Angeles. Thanks to his trombone playing father and piano teaching mother, he became immersed in music from day one and the story goes that he was given his first set of vibe mallets by his hero Lionel Hampton at the age of 5. Constantly performing and recording since the 1960s, he is one of the most famous jazz vibraphonists. He has produced some of the most loved modern soul-jazz records of all time such as, "Everybody Loves The Sunshine", most influential afro-jazz with musician Fela Anikulapo-Kuti (Africa - Centre Of The World) and the most seminal jazz-funk, such as "Running Away". And that's just the surface. 2004 saw the release of "Virgin Ubiquity: Unreleased Recordings 1976-1981" which were 'lost' sessions tapes that he had discarded. Gilles Peterson described this as the equivalent of finding a lost Beatles album. No doubt this helped him win the Gilles Peterson 2004 Worldwide Lifetime Achievement Award. Roy Ayers is ageless and evergreen and as per the title of another one of hits, remember "We All Live In Brooklyn Baby". Timeline Ayers started recording as a bebop sideman in 1962 and rose to prominence when he dropped out of City College and joined jazz flutist Herbie Mann in 1966. In the early 70's, Roy Ayers started his own band called Roy Ayers Ubiquity, a name he chose because ubiquity means a state of being everywhere at the same time. Ayers was responsible for the highly regarded soundtrack to Jack Hill's 1973 blaxploitation film Coffy, which starred Pam Grier. He later moved from a jazz-funk sound to R&B, as seen on Mystic Voyage, which featured the songs "Evolution" and the underground disco hit "Brother Green (The Disco King)", as well as the title track from his 1976 album Everybody Loves the Sunshine. In 1977, Ayers produced an album by the group RAMP, Come into Knowledge, commonly and mistakenly thought to stand for "Roy Ayers Music Project". That fall, he had his biggest hit with "Running Away". In late 1979, Ayers scored his only top ten single on Billboard's Hot Disco/Dance chart with "Don't Stop The Feeling," which was also the leadoff single from his 1980 album "No Stranger to Love", whose title track was sampled in Jill Scott's 2001 song "Watching Me" from her debut album Who Is Jill Scott? In the late 70's, Ayers toured in Nigeria for six weeks with Afrobeat pioneer Fela Kuti, one of the Africa's most recognizable musicians. In 1980, Phonodisk released Music of Many Colors in Nigeria, featuring one side lead by Ayers' group and the other lead by Africa '70. In 1981, Ayers produced an album with the singer Sylvia Striplin, Give Me Your Love (Uno Melodic Records, 1981). He has also worked in collaborations with soul songstress Erykah Badu. Ayers performed a solo on John "Jellybean" Benitez's production of Whitney Houston's "Love Will Save The Day" from her second multi-platinum studio album Whitney. The single was released in July 1988 by Arista Records. Ayers has played his live act for millions of people across the globe, including Japan, Australia, England and other parts of Europe. Ayers is known for helping to popularize feel good music in the 70's, stating that "I like that happy feeling all of the time, so that ingredient is still there. I try to generate that because it's the natural way I am". The types of music that he used to do this consisted of funk, salsa, jazz, rock, soul and rap. 1990s to present In 1992, Ayers released two albums, Drive and Wake Up, for the hip-hop label Ichiban Records. In 1992, Ayers collaborated with Rick James for an album and is quoted to have been a very close friend of his. In 1993, Ayers appeared on the record Guru's Jazzmatazz Vol.1 featuring on the vibraphone in the song "Take a Look (At Yourself)". In 1994, Ayers appeared on the Red Hot Organization's compilation album Stolen Moments: Red Hot + Cool. The album, meant to raise awareness and funds in support of the AIDS epidemic in relation to the African-American community, was heralded as "Album of the Year" by Time Magazine. During the 2000s and 2010s, Ayers ventured into house music, collaborating with such stalwarts of the genre as Masters at Work and Kerri Chandler. Ayers started two record labels, Uno Melodic and Gold Mink Records. The first released several LPs, including Sylvia Striplin's, while the second folded after a few singles. In 2004, Ayers put out a collection of unreleased recordings called Virgin Ubiquity: Unreleased recordings 1976–1981 which allowed fans to hear cuts that didn't make it onto the classic Polydor albums from his more popular years. Roy Ayers hosts the fictitious radio station "Fusion FM" in Grand Theft Auto IV (2008). In 2015, he appeared on Tyler, The Creator's new album Cherry Bomb on the track "Find Your Wings". A documentary the Roy Ayers Project featuring Ayers and a number hip hop producers who have sampled his music and other people who have been influenced by him and his music has been in development for a number of years. Pharrell Williams cites Roy Ayers as one of his key musical heroes. Ayers is a recipient of the Congress of Racial Equality Lifetime Achievement Award. http://www.royayers.com http://www.bassics.de/ayers.html http://www.discomuseum.com/RoyAyers.html Read more on Last.fm. User-contributed text is available under the Creative Commons By-SA License; additional terms may apply.
FREE SHIPPING ON ORDERS OVER £100 TO UK MAINLAND ONLY
See exclusions
View Cart