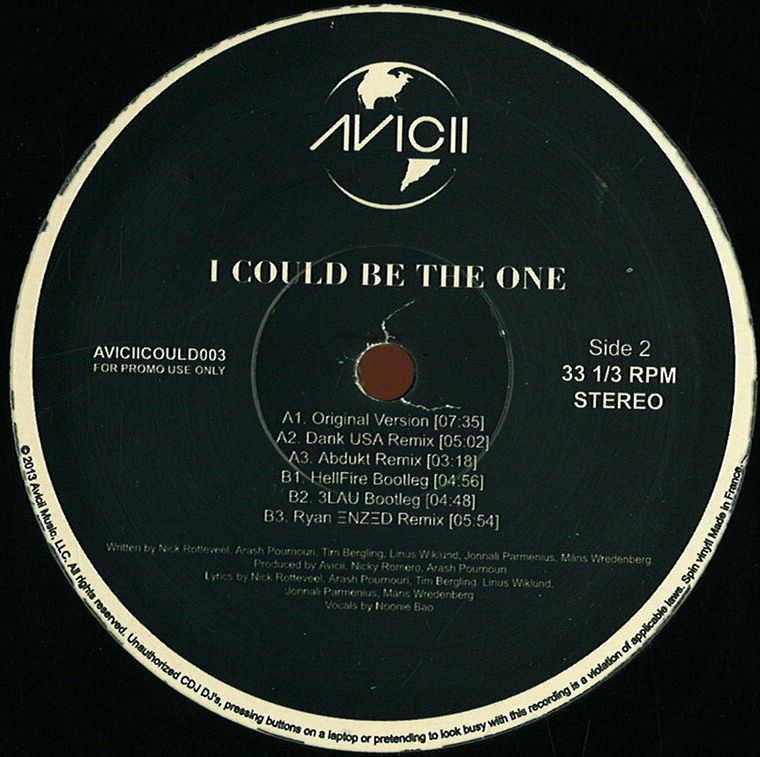 AVICII / NICKY ROMERO - I COULD BE THE ONE

Tim Bergling (born September 8, 1989 in Stockholm, Sweden, died April 20, 2018 in Muscat, Oman), better known by his stage name Avicii (stylized as ΛVICII and ◢ ◤), was a Swedish DJ, remixer and record producer. Avicii was ranked 3rd on DJ Magazine‍‍ '​‍s annual Top 100 DJs in 2012 and 2013 and has been nominated twice for a Grammy Award, once for his work on "Sunshine" with David Guetta in 2012 and once for his song "Levels" (which sampled the 1962 Etta James track "Something's Got a Hold on Me") in 2013. Some of his most famous songs are "I Could Be the One" with Nicky Romero, "Wake Me Up", "You Make Me", "X You", "Hey Brother" and "Addicted to You". In May 2007, Avicii signed on with the Dejfitts Plays label. Then, in 2010, Avicii released the hit song "Seek Bromance", which reached the top 20 in several countries including Belgium, France, the Netherlands, United Kingdom, and Sweden. He also remixed Nadia Ali's classic single "Rapture" for her album Queen of Clubs Trilogy: Onyx Edition. In October 2010, Avicii signed with the European A&R team with EMI Music Publishing. Avicii released his final album prior his death in 2015 titled "Stories". The LP was his second album to go #1 and spawned the chart-topping "Waiting for Love" as well Top 5 hit singles "For a Better Day" and "Broken Arrows". The single "Pure Grinding" also reached Top 20. In 2017, Avicii released what was originally meant to be the first EP to a three-part album. The extended play was named "Avīci (01)" and spawned the #1 Sandro Cavazza-assisted hit "Without You". Additionally, the Top 3 single "Lonely Together" which featured Rita Ora was also released from the EP. "Avīci (01)" itself also went #1 and was another smash success for the DJ. He died on 20 April 2018 in Muscat, Oman, at the age of 28; the manner of his death was identified as suicide, the specific cause and method withheld from the public in accordance with standard media treatment of suicides. Over a year after his death, on June 6th 2019, a posthumous album titled "TIM" was released. The singles "SOS" (featuring Emanon's Aloe Blacc), "Tough Love (featuring Vargas & Lagola and Agnes) and "Heaven" were released from the LP. The latter song featured vocals from Coldplay's lead singer Chris Martin. "SOS" reached a peak at the top of the charts, whilst the two following singles managed to reach the #2 position. The album itself also peaked at #1, making it his third album (fourth counting his 2017 EP "Avīci (01)") to do so. Read more on Last.fm. User-contributed text is available under the Creative Commons By-SA License; additional terms may apply.

“The main aim is to up my game at every possible turn without compromise.” – Nicky Romero “The word wunderkind was pretty much invented for the likes of 24-year-old producer Nicky Romero.” – DJMag Strike up a conversation about the current state of EDM and it won’t be long before Nicky Romero gets an emphatic mention. The breakthrough star with the bulletproof work ethic is credited as a driving force behind the fantastic health the scene currently enjoys. In every aspect of his life – as DJ, producer and label head – he is a tireless advocate for his art. Couple this with his distinctive signature sound and compelling output, and it is no surprise that he exploded into the DJ Mag Top 100 chart at number 17 in 2012, the highest new entry that year, and rose up to number 7 in 2013. Nicky Romero, real name Nick Rotteveel, was born January 6th 1989 in the small city of Amerongen, Holland. A keen interest in the drums and an early career spinning house and r&b quickly evolved into an unbridled passion for music production. Early releases, picked up by boutique outfit Once Records, caught the attention of some of the more established labels: Spinnin’, Fly Eye, Toolroom and Flamingo Recordings. As he worked on honing his sound – a seductive blend of progressive house tinged with electro and acid – he sent a bootleg of David Guetta smash “When Love Takes Over” out into the world. The track’s online success piqued the interest of Guetta himself and in that moment Romero found his mentor and champion. They have since collaborated on multiple projects including “Metropolis” and “Wild One Two,” and in the summer of 2012 Nicky Romero accepted a residency at David Guetta’s infamous FMIF club night at Pacha/Ushuaia Ibiza. Today, Nicky Romero is paying it forward with his Protocol brand that is quickly establishing itself as a leading dance music platform - a go-to outlet for forward-thinking dance music. Championing up and coming artists, like Don Diablo, John Dahlback, Vicetone, Kryder, Michael Calfan and Merk & Kremont, with his record label, club night and radio show, Romero extends his influence to help develop the next generation of artists, while also supporting more established acts such as Calvin Harris, R3hab, Nervo, Krewella and Bassjackers, amongst others. With the label’s releases consistently flowing in the Beatport top 10, it is clear that its impact is being heard around the world. Furthermore, Protocol Radio, a weekly show syndicated to more than 60 radio stations on FM, receives over 40 million listeners every week and it continues to grow at a rapid rate. Recent studio output includes “S.O.T.U.,” a single released on Steve Angello’s label Size Records, the worldwide hit, “Legacy” with Krewella, his solo single, “Symphonica,” his UK #1 “I Could Be The One” with Avicii, and remixes for Zedd, Calvin Harris, and more. Additionally, Romero has produced Rihanna’s track, “Right Now,” together with David Guetta, as well as two tracks for Britney Spears. Whether it’s his own original song, a collaboration, or an inventive remix, he consistently receives massive support from a veritable who’s who of dance music aristocracy. Romero is a force to be reckoned with not only as a producer but also as a DJ. Behind the decks his tenacity and ability to work a room was rewarded as he rounded out an intense international touring schedule including his Nothing Toulouse North American headline tour, his residency at The Light Las Vegas, Coachella, Sensation White, and mainstage appearances at Ultra Music Festival, Electric Daisy Carnival Las Vegas, Tomorrowland, and countless others. One of his stand-out performances of 2013 was at Tomorrowworld where he was the first DJ to play equipped with Google Glass. On top of his own gigs, he produced Protocol Recordings label nights in Miami and Amsterdam that were both a smashing success. Building upon his accolades, such as his MTV EMA nomination for Best Dutch Act, and prosperity in 2013, Nicky Romero continues to make his indelible mark on the music industry that can be felt in the hearts of his devoted fans. Pushing relentlessly forward with the wind at his back and a new professional studio, he will begin the next era of his career with a debut album coming in 2014. With these plans and much more to come, the Nicky Romero brand is expected to grow and mature, becoming an increasingly influential and venerated force in the international music arena. Nicky Romero online: Nicky Romero Website: www.nickyromero.com Nicky Romero Twitter: www.twitter.com/nickyromero Nicky Romero Facebook: www.facebook.com/djnickyromero Nicky Romero Soundcloud: www.soundcloud.com/nickyromero Protocol Recordings: http://www.protocolrecordings.com Protocol Recordings Twitter: http://twitter.com/protocolrec Protocol Recordings Facebook: http://facebook.com/protocolrecordings Protocol Radio Facebook: http://facebook.com/protocolradio Protocol Radio Twitter: http://twitter.com/protocolradio Protocol Radio Site: http://www.protocol-radio.com Protocol Radio iTunes: http://tinyurl.com/Protocol-Radio-Itunes Protcol Radio Mixcloud: http://www.mixcloud.com/protocolradio/ Protocol Radio Youtube: http://www.youtube.com/protocolradioplaylist Read more on Last.fm. User-contributed text is available under the Creative Commons By-SA License; additional terms may apply.

OTHER RELEASES ON AAA RECORDINGS OR BY AVICII / NICKY ROMERO:

We have many other items in stock by Avicii / Nicky Romero and on the label AAA Recordings.